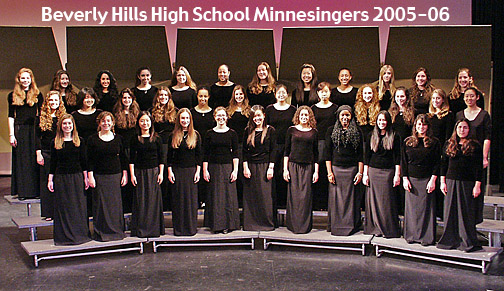 OK! So no one knows what Minnesinger means. Well, the name actually has a very respectable history!

MINNE = LOVE, and the Minnesingers were musicians of noble birth who sang of love, of heroism, and of nature. They were to the German-speaking world centuries ago what the Troubadours and Trouvères were to English and French-speaking lands. they sang. they sang well. And they sang for the LOVE of it.

That's us! The BHHS Minnesingers were founded 39 years ago as a mixed chorus and were reincarnated (after a little time off) seven years ago as a Women's chorus. Since that time they have reached an ever-increasing audience and have grown from a chorus of 19 to it's current 38. The Minnesingers sing jazz. They sing madrigals. They sing Poulenc, Britten and Brahms. They sing pop and musical theatre. And they sing for the LOVE of it!

For the first time, Minnesingers competed in two different festivals in one season, taking gold medals in both. In New Orleans, they received accolades from the judges of World Projects New Orleans Festival, held during the exciting week of the Jazz Festival. Several weeks later, the Minnesingers took home four first place honors at the Heritage Music Festival in Anaheim, where they also were invited to a national Festival of Gold in New York City.

In April of 2002, the Minnesingers took top honors at the Heritage Choral Festival in San Francisco, where they received four awards - 1st Place Gold in their category, an Adjudicator's Award for exceptionally high marks, a Sweepstakes Award for the highest scores of any chorus in any category, and an invitation to the Festival of gold next year, a very select festival for top scoring ensembles. Clinician Dr. Elena Sharkova praised the ensemble for its communication with the audience and for the joy they brought to their singing.

In 2002, Minnesingers took 1st place Gold at the Heritage Music festival in Las Vegas, Nevada, and they were awarded the Spirit Award for their enthusiastic support of others in the festival and for their outstanding communication onstage.

In 2002, Minnesingers were invited to the very select Lincoln Center Choral Festival, staged by World Projects International. They placed with a silver medal and delighted the audience at Alice Tully Hall with the varied and expressive repertoire they presented.

Spring 2001 saw the Minnesingers earning a First Place Gold Medal at the Heritage Choral festival in San Francisco (OK, it was really 45 minutes outside of San Francisco, but we DID spend a day sight-seeing and going to the theatre in S.F.) The festival program was a challenging one, even including the magnificent Psalm 23 of Schubert. The judge who addressed us immediately following told us that of the dozens of choruses they had heard in two days, Minnesingers was the only one to fill the room with such joy and to communicate in a wide variety of styles.

In a further honor, the singers were invited to New York for the Heritage Festival of Gold, an honor whch only goes to groups with exceptionally high schores as compared to groups in festivals all over the country. They received a similar invitation after their performance in Las Vegas this year.

Another great part of the trip was a private workshop with Dr. Elena Sharkova of San Jose State University. She shared her vitality, scholarship, and technical skill in a small chapel at the Unibersity and helped inspire the Minnesingers to their best singing of the year at the Festival.

Leadership is the life blood of Minnesingers. The officers have arranged concerts and acted as "business managers" in bringing the ensemble to the community. Students also serve as conductors - one memorable concert featured SEVEN different singers as student conductors!