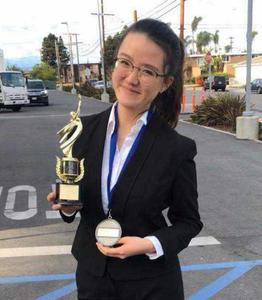 This was a tough semester for BHUSD, including my wheelhouse as coach of the debate teams at Beverly and Beverly Vista Middle School.

To my debaters’ collective credit, they stayed focused during the half-semester spring lockdown. The BVMS team held weekly Zoom practices with me every Wednesday morning and the high school team checked in with me every week as both squads prepared for four online local and national competitions in April, May and June.

For the Beverly team, the lockdown hit us hard in mid-March with the cancellation of the 2020 State Championship in San Jose. Speech and debate competitors statewide who had qualified instead saw Covid-19 obliterate months of all manner of preparation.

On March 7th, Senior and Beverly Team Captain Diane Jeong had qualified for State in the Student Congress event – what a great way to end her high school life!

That was not to be. But Diane has a brilliant level of focus, so she and the team instead prepared for an online regional tournament in late April to qualify for June’s online National Tournament.

Several debaters cared little about qualifying, but in true Beverly fashion they signed up for the qualifier just so Diane would not be the only Norman in her rounds. She did not qualify in Student Congress but her record of four years of debate won her a spot instead on the “world schools” team for our West L.A. region at Nationals.

Meanwhile at BV, the middle schoolers eagerly prepared for two online tournaments in late May. On May 22nd, six BV debaters competed in a national online "Big Questions" tournament. BV 7th grader Ruby Matenko competed up to quarter finals (which is impressive since many of the other debaters nationwide were high school kids).

A week later, on May 28th, five middle schoolers and two Beverly debaters competed in an online tournament hosted by BH-adjacent YULA Girls High School on Robertson south of Pico. I coach the team there and since they cannot compete at secular tournaments on Shabbat, my YULA Girls team works with the Beverly debaters to hold four, mid-week, evening tournaments each year on the small but architecturally impressive YG campus. Graduating BVMS eighth grader Mia Patel took Second Place and YG junior Sarah Nachimson won First.

This competition also attracted debaters from Alhambra High School and La Reina High School in Thousand Oaks. Special recognition goes to BVMS eighth grader Diane Song: even though she has been stuck in South Korea on lockdown, Diane was on Zoom at 1 a.m. Seoul time for Round 1’s 9 a.m. PST start time!

Interpersonal communication is my business, but for now that skill set exists primarily on the sterile screens of smartphones, laptops, desktops. The simple gesture of shaking an opponent’s hand after a round has been lost, and that human reflex is not readily replicated by the thumbs-up we give each other at the close of a Zoom chat.

Yet I am blessed to work for a great school district with great staff and parents who do not ask me for the teams’ trophy counts but instead ask if the kids are happy, and learning, in debate. Yes to both.

BHUSD Assistant Superintendent Dustin Seemann, Beverly Hills High School Principal Mark Mead, Beverly Vista Middle School Principal Kevin Allen, BVMS Assistant Principal Jeanne McCrea and especially Beverly CTE Coordinator Cindy Dubin and College & Career Center Assistant Michelle Redston all appreciate how our teams have smart, happy students who put debate in perspective. The kids remind themselves that it is just a debate team, one of the district’s many fine extracurricular activities: it is neither the curriculum nor the heart of school life, but instead part of a compleat student portfolio.

For June’s high school Nationals, Diane Jeong prepared for weeks with our region’s world schools team. Then, another disappointment: on the night of Sunday, June 14th she had severe back pain and could not compete when national rounds started the next morning, even though it was online. Her team had to compete without her (and did not break out of the preliminary rounds).

Beverly’s graduating seniors will remember this spring's life lessons decades after their trophies and medals gather dust, packed away in attics. Current disappointments, in time, become a wisdom muscle, helping to keep us hopefully young, and certainly wiser.

That stuff, now, is the past. This fall Diane starts college at the Pratt Institute in Brooklyn (as former Beverly Hills resident Mr. Frank Sinatra would say, “Start spreading the news…”) As for her fellow seniors/team captains: Stevie Aceti is heading to Pittsburgh on a full scholarship at Carnegie Mellon, and Katherine Bim-Merle will be on scholarship as well at Cornell.

Consider this good spring memory: Diane qualified for the State tournament on March 7th at Leuzinger High School in Lawndale in the South Bay. The final round was quite tough, and she was worried she would not make it to the top five and thus qualify for State. Later at the awards ceremony the tournament director started announcing the final round’s 10th through 6th places. Tears slowly started building in Diane’s eyes when her name was not 5th place and then was not 4th. Diane was shaking her head, certain that she would not be in the top 3, and, yes, she did not win 3rd place, and so she would not be going to State.

She was holding back even more tears after the applause died down for 3rd place.

She did it. Diane Jeong was going to State.

It is a wonder, it is something special, to watch a kid’s saddest tears become - in one second - wild, joyous crying.

No lockdown can take that moment away from Diane, or me, or Beverly Hills.